A Quaker service of celebration was held in Tenby on 1st August 2022 for Peter who recently died in Tenby aged 100 had had two or more successful careers before I came across his new Walled Towns Friendship Circle by the happy co-incidence that I had a student working in the near-to-Bristol walled town of Chepstow.

A year earlier (1989) the Circle had emerged from Peter's fertile imagination and with his enthusiasm tempered by his friends John Beynon, John Tipton and Bob Storey it gained support from the Wales Tourist Board and the European Commission as part of the European Year of Tourism’. This Appreciation is also available as a .pdf

Peter had just retired from running a hotel and set off round Western Europe armed with a well designed and produced brochure and certificates of membership and friendship, which he liberally awarded to some 130 walled towns in Wales, England, Scotland, Ireland, France, Belgium, Austria, Germany, Italy, Spain, Portugal and the Netherlands. In 1991, some 70 delegates from fifty or so walled towns came to an inaugural conference hosted by the Wales Tourist Board in Cardiff Castle. Working through the night we established a basic constitution and within a couple of days the Walled Towns Friendship Circle (WTFC) was an established trans-national body with an Executive committee, chaired by Cllr John Price of Chester and a membership of up to 140 towns. The intent was to hold annual symposia, hosted by individual towns, as well as holding six monthly Executive Committee meetings. Peter Osborne was elected President with the Tenby based volunteers as the secretariat.

Cittadella in the Veneto agreed to host the first WTFC Symposium (1992) and set such a high standard of hospitality and quality that other towns felt a bit wary of emulating it. However Loches in France stepped up to the plate for 1993 and other towns queued up to follow with either a more modest Executive meeting or a Symposium. 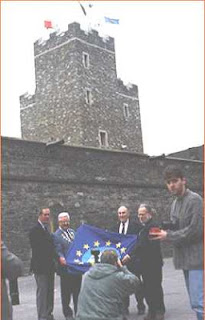 The 1994 Derry / Londonderry Symposium was an early achievement for Peter. With the heavy weight political commitment of the late John Hume, who spoke eloquently ("If Stones could Talk...") at the meeting in Derry/Londonderry was made possible by an early truce in the troubles. Both the communities within that city as well as delegates, invited by Peter, from Carrickfergus, a staunchly Ulster walled town, took part and talked peaceably together in ways that seem to have in ways that foreshadowed and may even have contributed to moves towards the peace which was finally celebrated three years later in the Belfast Good Friday Agreement. As Walled towns delegates from around Europe, we were the first civilians to walk around the ‘London’ walls of Derry in twenty years, undermining their long standing role as a symbol of conflict and paving the way for them to become, as they remain, an historic monument. The walls are interpreted to explain differing traditions and differing heritages which can all be celebrated and then serve the peaceful purposes of attracting visitors and tourists.

Meanwhile the Friendship Circle had become a partner in a trans-European tourism research project which brought together four walled towns - Chepstow, Naarden, Alcudia and Conwy – with three Universities.

Walled towns across Western and increasingly from central and Eastern Europe joined the select group, which hosted Symposia and Executive meetings. In Peter's ten years as President, large and small walled towns the across eleven countries shared the honour and bore the costs of the meetings.

Sharing his Quaker values of friendship and decisions by consensus, Peter led by example up to the year 2000 when nearing 80, he made way for a successor President. He had promoted the original objective "to encourage friendship between the inhabitants of all ages in walled town communities" and in Piran (Slovenia) in 1998 put forward a Declaration, which emphasized the conservation ethic of the Circle, establishing the concept of walled towns as Timestones of History'

Walled Towns are unique inheritances from times long past and should be treasured, maintained and safeguarded from neglect and destruction and passed into perpetuity as irreplaceable 'Timestones of History’‘

In the year 2000, the 10th Symposium brought friends and walled towns from all over Europe to Tenby, Peter’s home walled town where he displayed all his hospitality and the voluntary secretariat and the town itself produced a special event. It was the culmination of what he had achieved and marked a smooth hand over to Cllr John Price of Chester. He had long been Chair of the Executive Committee and now became President with a Chester Council based Secretariat, led by Chris Lines and a new Treasurer - Medwyn Jones of Denbigh - to provide a firm foundation for further development.

As Life President, Peter continued to exert his benign influence and to take part in WTFC events for many further years. In 2008, he gained wide acceptance for his Canterbury Accord with re-enforced his ideal that walled towns strive to become ‘sanctuaries of conciliation and peace’.

During this second phase of the Friendship Circle substantial initiatives with the deep transnational involvement of a number walled towns included school exchanges with then ground breaking “virtual" link ups ("The Young in the Shelter of  Town Walls") and also policy guidance for the inclusive access to the heritage and monuments of walled and historic towns (the large scale ARCHWay project). Each was led by a different town but both reflected Peter's ideals.


In the same period walled towns including Tenby itself continued to host intensive undergraduate and post graduate field study trips, especially from University of West of England, Bristol both within and across and across European borders and to generate published research.

After 2009, WTFC evolved into European Walled Towns and formal leadership – the presidency and secretariat - devolved first to Den Bosch in the Netherlands and then to Malta with continuing Symposia and Executive meeting to complete over 25 years of activity in 2015 including more than fifty transnational meetings which in turn have produced lasting friendships across the European continent and its associated islands.

The Walled Towns Friendship Circle, was once described as akin to a network of twin towns. With the great range of size, wealth and local political autonomy, perhaps a network of sibling walled towns would be more accurate but it has left a legacy of common aspirations among its many participants which continues into the future.

For Peter's 90th Birthday in 2011, friends from walled towns across Europe sent congratulations and distinctive bottles of wine from Walled Towns vineyards across Europe. 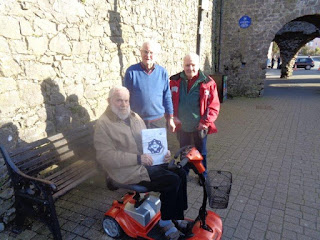 Peter's interest and enthusiasm continued throughout his 90s, latterly as patron of his initiative to take forward his commitment to Walled Towns Heritage to future generations. A select group of walled towns in Britain and Ireland have met (often by Zoom once Covid struck) to encourage and part fund local school and other youth related projects.

Peter’s 100th Birthday acted as a powerful focus which has and is producing interesting results, with which Peter kept pace with and supported to within a couple of weeks of his death in July 2022: school children in North Wales have been filmed learning about and exploring past lives within the walled town of Conwy and are expected soon to do so also in Caernarfon; children at a Berwick-upon-Tweed school have developed in parallel with and supported another in York, a distinctive but repeatable local history diary project; teaching materials for Walled Towns Heritage are being produced in Chester and Derry/Londonderry. 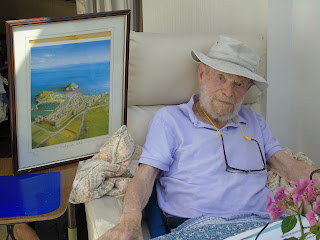 Peter's 100th Birthday last year was therefore not only a celebration of his illustrious life but looked forward to continuing vibrant walled towns projects. He will be surely be missed but not forgotten. 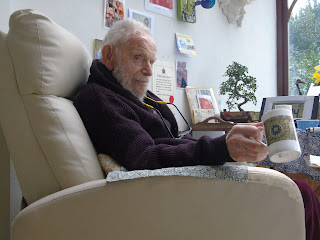