Posted by dnemb at 15:38
Vitoria-Gasteiz is a city of 235,000 and capital of the Basque country county of Alava,
it rediscovered its medieval walls when restoring its medieval cathedral and through subtle interpretation is using them to revive the fortunes of its previously run-down inner city precinct. The Peninsualr War battle of Vitoria is commemorated in the city. It hosts the Arabarri consortium of walled towns of Alava and took part in ARCHWAY events. The WTFC TEKnet is based there. 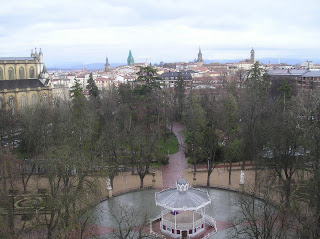